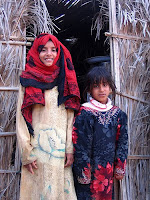 "The government of Yemen is also facing two other militant groups - al-Qaeda and southern secessionists.

South and North Yemen were united in 1990 and fought a brief civil war in 1994, and grievances with separatists still remain.The truce with the Houthis in northern Yemen has allowed the government in Sanaa to turn its attention to the secessionist movement and to the al-Qaeda cadre said to be hiding out in the same area.

Elsewhere in the country security around oil infrastructures has been tightened following warnings of a possible revenge attack by al-Qaeda in the Arabian Peninsula.

During 2008, Oman consumed an estimated 80,000 bbl/d of oil, with net oil exports estimated at 680,000 bbl/d. Though a significant oil exporter, Oman is not a member of the Organization of the Petroleum Exporting Countries (OPEC). China, Japan, South Korea, and Thailand are the largest importers of Omani crude.
http://www.eia.doe.gov/cabs/Oman/Oil.html
Consider these countries issues of terrorist training and oil, and imagine how the local people are affected. Write about it.
Posted by Cyber Me If You Can at 1:48 PM