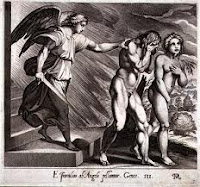 Paradise Lost is an epic poem in blank verse by the 17th-century English poet John Milton. It was originally published in 1667 in ten books, with a total of over ten thousand individual lines of verse. A second edition followed in 1674, redivided into twelve books (in the manner of the division of Virgil's Aeneid) with minor revisions throughout and a note on the versification; the majority of the poem was written while Milton was blind, and was transcribed for him.[1]

The poem concerns the Christian story of the Fall of Man: the temptation of Adam and Eve by the fallen angel Satan and their expulsion from the Garden of Eden. Milton's purpose, stated in Book I, is to "justify the ways of God to men"[2] and elucidate the conflict between God's eternal foresight and free will.

Milton incorporates Paganism, classical Greek references, and Christianity within the poem. It deals with diverse topics from marriage, politics (Milton was politically active during the time of the English Civil War), and monarchy, and grapples with many difficult theological issues, including fate, predestination, the Trinity, and the introduction of sin and death into the world, as well as angels, fallen angels, Satan, and the war in heaven. Milton draws on his knowledge of languages, and diverse sources – primarily Genesis, much of the New Testament, the deuterocanonical Book of Enoch, and other parts of the Old Testament. Milton's epic is generally considered one of the greatest literary works in the English language.

http://en.wikipedia.org/wiki/Paradise_Lost
Posted by Cyber Me If You Can at 9:49 AM